Even if you have a beginner-level knowledge of blockchain technology, it is likely that you have heard of the word “scalability” and how every new blockchain startup is claiming to offer high levels of it.

Scalability issues have persisted ever since the advent of technology. With every new technology that has emerged, scalability problems have almost always come alongside it. Blockchain technology, unfortunately, is not immune to the dilemma.

To put it into layman’s terms, scalability refers to the measure of a system’s capability to adapt to unexpected changes or increased workload. Higher scalability means competitive advantage and an increased level of performance even in a high-stress environment.

In a blockchain, several factors determine scalability, including cost and capacity, networking, and throughput. However, maintaining scalability has been a challenge ever since the technology first emerged to support the popular Bitcoin network in 2009.

With new use cases of the technology surfacing every day, such as smart contracts, NFTs, GameFi, DAO, and more, blockchain developers are even more so facing the “scalability trilemma”, a term coined by Ethereum co-founder Vitalik Buterin describing the act of balancing decentralization, security, and scalability when building a blockchain architecture. 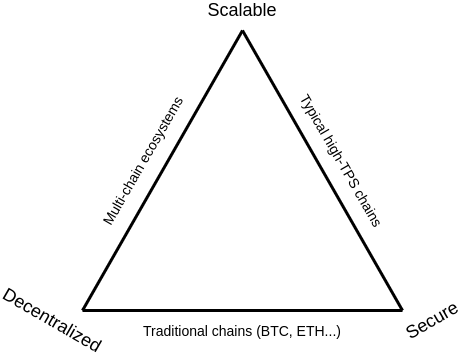 While blockchain engineers and developers have tried several ways to address the issue, such as sharding, increasing block size, or hiking network fees, multiple experts believe that it will be difficult to see real results unless there is a massive shift in the fundamental monolithic architecture of a blockchain.

A monolithic blockchain refers to a blockchain that seeks to handle all the key functions, that is, transaction execution, network consensus, and data availability, from within a single system. Ethereum, Bitcoin, and Solana are some of the current blockchain networks that have a monolithic architecture.

In a monolithic design, all the nodes and validators of the network are required to execute the same transactions and do consensus on the chain. While that has worked in the past, the burden of increasingly complex use cases of blockchains has resulted in reduced scalability, causing some of the networks to often break down, report sluggish transaction speed, and record higher processing costs.

For instance, it takes around 10 minutes for the Bitcoin network to generate a block size of 1656.91 transactions (as of 24 May, 2022). That means the network is only responsible for executing only 2.76 transactions per second (TPS).

However, even if all the nodes come to a consensus and increase the block size to store more data, the outcome may impact the decentralization and security of the network.

Hence, to tackle this issue, a different approach, which is in the process of adoption by Ethereum, is recommended. Called modular blockchain, it introduces a new kind of architecture that segregates the key functions of the blockchain into separate layers.

If we want to elaborate on Modular Vs Monolithic, Modularity means separating the system into several manageable parts or components that are independently developed. In a modular blockchain architecture, the execution layer is independent of the base consensus and data availability layers, allowing nodes to execute transactions of their choice instead of performing all the transactions to check validity. The three core layers are:

The consensus layer: The consensus layer establishes the set of rules to be followed by nodes for verifying and validating the blocks, and reaching a consensus. This layer ensures there is an agreement among all the nodes with respect to the established blocks and transactions, thereby guaranteeing trust, security, and decentralization.

Ethereum became the first blockchain network to adopt a modular chain design owing to its smart contract capabilities. As more dApps and smart contracts developed on the network, it became apparent that Ethereum needed to tackle issues of slow transaction speed and high gas costs.

Layer 2 technologies, zero-knowledge rollups, sidechains, plasma, and validium are some of the off-chain scaling solutions that handle the execution of transactions for Ethereum.

Polygon, one of the most popular Ethereum scaling solution providers, recently revealed the testnet plans for Avail, a modular design solution that claims to act as a ‘data availability layer’ for blockchains building on it.

Meanwhile, modular blockchains do not conform to a single architecture. Another blockchain project that is gaining momentum is Hyperledger Fabric, an enterprise-grade, open-source distributed ledger framework that claims to be a highly-modular, DLT platform for a variety of industry use cases.

As development in the space continues to grow, a modular blockchain ensures that a network remains highly scalable without sacrificing the optimum levels of security and decentralization. Monolithic chains like Ethereum and Solana are already pivoting towards modular structure as developers recognize the need for seamless and cost-effective transaction flow.

Modular blockchain designs, ultimately, contribute to the core purpose of Decentralized Ledger Technologies (DLTs), which is storing of information in an immutable manner against any forms of manipulation.

We write intriguing articles to bring you the most of the Web3 and NFT space. Follow bitsCrunch or head over to our blogs to gain more industry knowledge!

Wherever you are in the NFT ecosystem, you're just a click away from securing and valuing your assets, and getting smart data insights.
Explore Our Products